Food for Thought: The Irish Credit Union Business Model – Has Anything Changed? 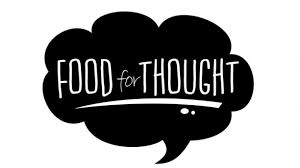 In December 2017, CFCFE proudly released its inaugural research paper: ‘The Irish Credit Union Business Model: Is it still fit for purpose’. The report identified critical weaknesses in the sector’s traditional business model, evidenced by at its most basic by deteriorating market share in consumer lending and a persistently low loan-to-assets ratio. At the same time, the paper noted the opportunity represented by the movement’s sustained popularity and the emergence of collaborative initiatives such as CUSOP, Payac and most recently Metamo.

We have considered whether we should revisit this paper, as some have urged. 40 months have elapsed, 13 of which have been dominated socially, economically, and politically by a pandemic.

Our immediate instinct was to look to key ratios from the Central Bank’s very helpful ‘Financial Conditions of Credit Unions, 2020: 1’ report (data to 30 September 2020). While savings have accelerated, lending has again not kept pace, 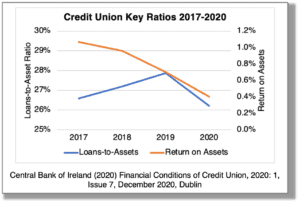 and the chart shows that the performance trends we pointed to in 2017 have not materially changed (even allowing for the extraordinary circumstances of 2020). With lending (and investment) income under pressure, and non-interest income remaining generally negligible, costs continue to rise such that the Central Bank notes the cost-income ratio for the sector is now 88%.

We could discuss the reasons for this, but our summary would be a continued lack of what some call ‘product-market fit’ between credit unions and the needs and attention of their members and those of non-members. As we summarised in 2017, “Credit union members [still] love their credit union, they just don’t [still] want to borrow from it.”

It is important to note that credit unions have retained their position as Ireland’s leading brand throughout this period, and new co-operative endeavours have emerged such as the Metamo initiative. The banks remain unpopular, and indeed are now fewer. So the possibilities we pointed to in 2017 are still there. But we are not convinced there is substantive change in what credit unions are doing or how they are doing it – there is not yet a new business model for us to analyse. What do you think?

CFCFE is hosting a webinar for its members to consider the development – or not – of the credit union business model in Ireland. For non-members of CFCFE, we would welcome your ideas and contributions to this discussion – email Nick Money at nick.money@swobodacentre.org.