Paul A. Jones and Nick Money from the Swoboda Research Centre were delighted to welcome last Tuesday Seán Fleming, Irish Minister of State with responsibility for Financial Services, Credit Unions and Insurance. Seán is TD for the constituency of Laois Offaly.

Visiting the north of England to mark St Patrick’s Day, the Minister wanted to get an insight into the British credit union movement, and Paul and Nick provided him and his colleagues from the Ministry of Finance, the Irish Consulate overseas trade teams with a briefing on British credit unions and their similarities with and differences to those in Ireland. The conversation also addressed some key issues facing Irish credit unions, following the Minister’s recent positive talks with representative bodies in Ireland. Minister Fleming was interested in our emerging thoughts on green lending, and hopes to attend the Swoboda conference on 20th May in Dublin where this topic will be explored further.

Following this discussion, Paul and Nick introduced Minister Fleming to the CEOs of Swoboda members Manchester Credit Union and No1 CopperPot Credit Union, Christine Moore and Caroline Domanski. Christine and Caroline explained their experiences across several areas, including their credit unions’ high loan-to-savings ratios relative to the average in Ireland, and mortgage lending. Then John Haslam from the Association of British Credit Unions Limited (ABCUL), joined the session, where the focus of conversation was strategic mergers. 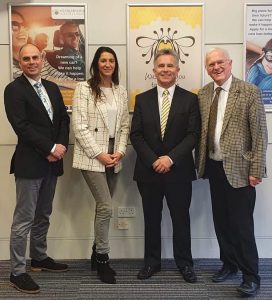 Pictured here at Manchester Credit Union are the Minister (centre right), with directors of Swoboda Nick Money (left) and Paul A. Jones (right), and Caroline Domanski (centre left), CEO at No1 CopperPot Credit Union and chair of Swoboda.