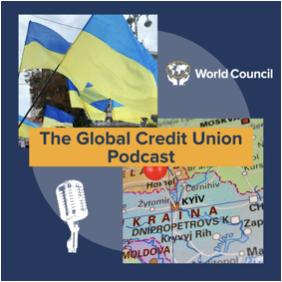 In this Global Credit Union Podcast from the World Council of Credit Unions (WOCCU), “Aleksandr”, a liaison to the Ukrainian credit union movement, talks about the dire circumstances facing both the people of Ukraine and its credit unions.

The podcasters are hiding Aleksandr’s real identify for his safety. However, the podcasters believe that the stories he shares about the devastating impacts of the Russian invasion of his country are very real. Aleksandr describes life for credit union employees and their members in Russian-occupied areas of the country, where there are shortages of food, water and other services. He also explains what Ukraine’s credit union associations and regulators are doing to help those credit unions that are still operational, and what those credit unions might need once the conflict is over.