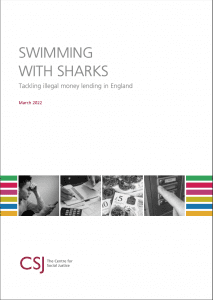 The Centre for Social Justice (CSJ), a think-tank focused on poverty based in London, has published a report on the extent of illegal lending in the UK, how it affects those who get drawn into borrowing from illegal lenders and how alternatives might be supported to combat this trade. CSJ estimates that today 1.08m people in England could be borrowing from an illegal moneylender.

In Swimming with Sharks: Tackling illegal money lending in England, CSJ shows how illegal lending exists in many forms, from small-scale lenders who pester their victims into repayment to violent predators and organised crime groups. Practices used by illegal lenders are changing, increasingly operating online and using social media to attract new customers. The report’s 24 recommendations include nine focused on expending the capacity of credit unions to serve their communities and reduce the need for people to turn to illegal lenders. The report cites Swoboda’s paper on Maximising Member Savings in support of its arguments around capital. Swoboda would not agree with all the specific proposals but fully endorses the ambition of the Swimming with Sharks report to reduce the damage done to people’s lives by illegal lending and the opportunity for the credit union movement to play a big part.

Dr Olive McCarthy (a member of Swoboda’s Research Advisory Board) and Dr Noreen Byrne at the Centre for Co-operative Studies at Cork University Business School, University College Cork, have undertaken research into this issue in Ireland: an example of their findings can be seen here.