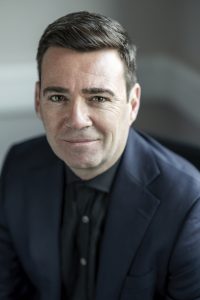 Andy Burnham, Mayor of Greater Manchester with a national political profile, is opening Swoboda’s Credit Union Conference in Manchester on 11th November. The focus of the conference is on the cost-of-living crisis, and the Mayor is going to offer his thoughts on the role credit unions can play in their communities, followed by a Q&A.

Responsible for shaping the future of Greater Manchester, Andy’s priorities include building a London-style integrated transport system, ending rough sleeping, transforming Greater Manchester into one of the greenest city regions in Europe and making Greater Manchester a great place to grow up, get on, and grow old. He is also on record as aspiring for Manchester to be a leading region for co-operation and was recently involved in encouraging Oldham Athletic FC to become a fan-owned club.

Before being elected Mayor of Greater Manchester in 2017, Andy was MP for Leigh from 2001 and held several positions in government, including Secretary of State for Health.

Come to the conference to hear from Andy Burnham and the other excellent contributors, including Miranda Flury from Canada. Agenda here. Booking details here.